Even though the last episode of Game of Thrones aired in May 2019. the popularity of this series changed the city of Dubrovnik forever. Ultimately, it helped Dubrovnik become a must-see destination for any true Game of Thrones fan (yes, even after the final season :D).

This list will take you through most iconic Game of Thrones filming locations in Dubrovnik (like the Kingdom of Quarth or the Blackwater Bay, or famous Walk of Shame)

WARNING: THE REST OF THIS ARTICLE CONTAINS SPOILERS FOR GAME OF THRONES SERIES 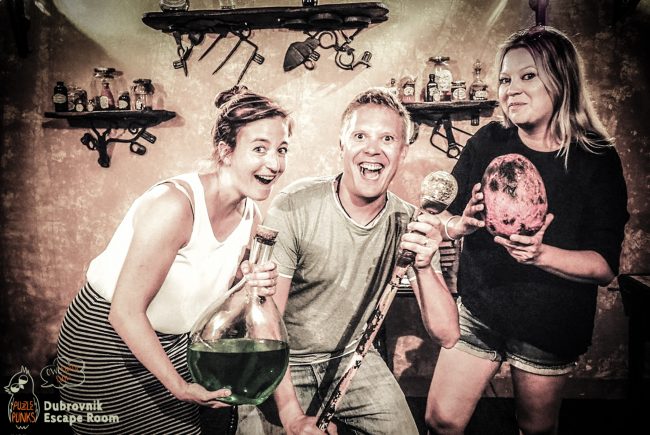 Challenge yourself at the unique  Game of Thrones inspired escape room – join the King’s Guards and try to save King’s Landing.

TIP: receive a FREE photo on the Iron throne (value: 10 euro) & 20 % discount for Game of Thrones walking tour when booking the escape room!

Take me to my adventure! 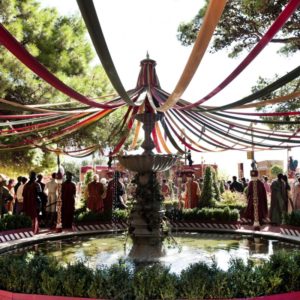 This is our local park with the most beautiful view overlooking the Old Town.

In the Game of Thrones series, Gradac was the filming location for Joeffrey and Margaery’s so-called “purple wedding”. Not only is this their wedding feast venue, but also the spot where King Jeoffrey took his final breath.
If you get tired of the sun, the heat and the crowds, by all means look for shelter in the shade of Gradac pine trees. Take a stroll through the park, relax, get some fresh air and let that first impressions of King’s Landing sink in.

Fort Lovrijenac (or the Red Keep from Game of Thrones show) was the filming location for numerous scenes. For one thing, celebration of Jeoffrey’s name day was here. Also this is where all the schemes and plotting against Tyrells started. 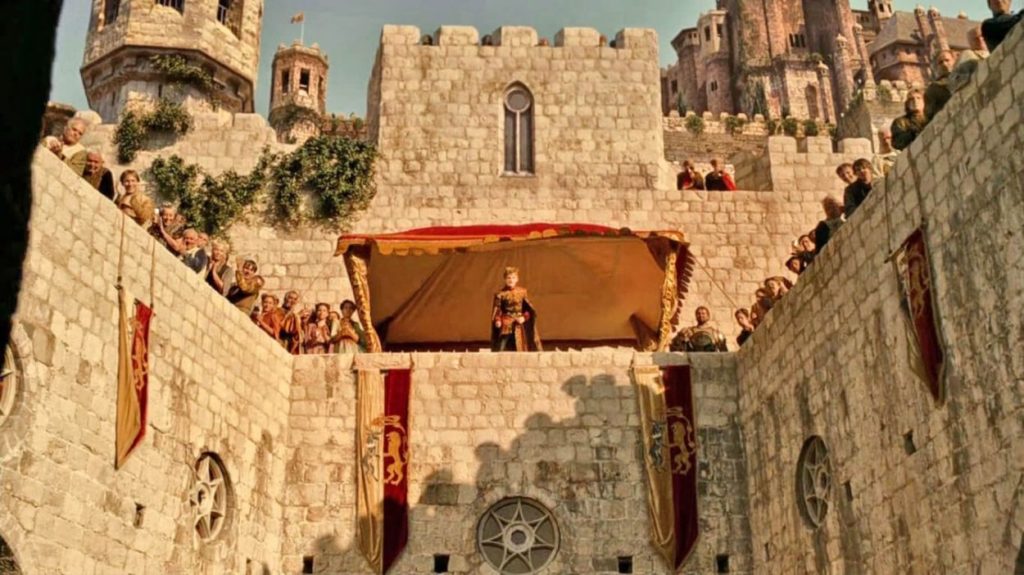 Since fort Bokar is part of the Dubrovnik city walls it was used a lot as a filming location for Game of Thrones. As it overlooks the Blackwater Bay, this was the place where Tyrion and Varys tried to think of the best strategy to defend King’s Landing in the Battle of Blackwater. Finally, in the last season, on this spot was where Cersei found out that the White Walkers have managed to breach through the Wall.

Fort Minčeta (or House of the Undying from Game of Thrones) was the filming location for two important scenes. One of them was Daenerys coming to the House of Undying to look for her stolen dragons. Second was Jon Snow being released from prison for killing Daenerys in the final season.

You need a ticket to enter the Dubrovnik city walls and visit the most iconic Game of Thrones filming locations.

However, we suggest that you buy a Dubrovnik Card because it costs just a tiny bit more, but it gets you a “hall pass” for many sites, museums and even local transport (so you actually save money in the long run).

It also gets you a 20% discount for the Game of Thrones-themed escape room!

I love discounts! Take me there! 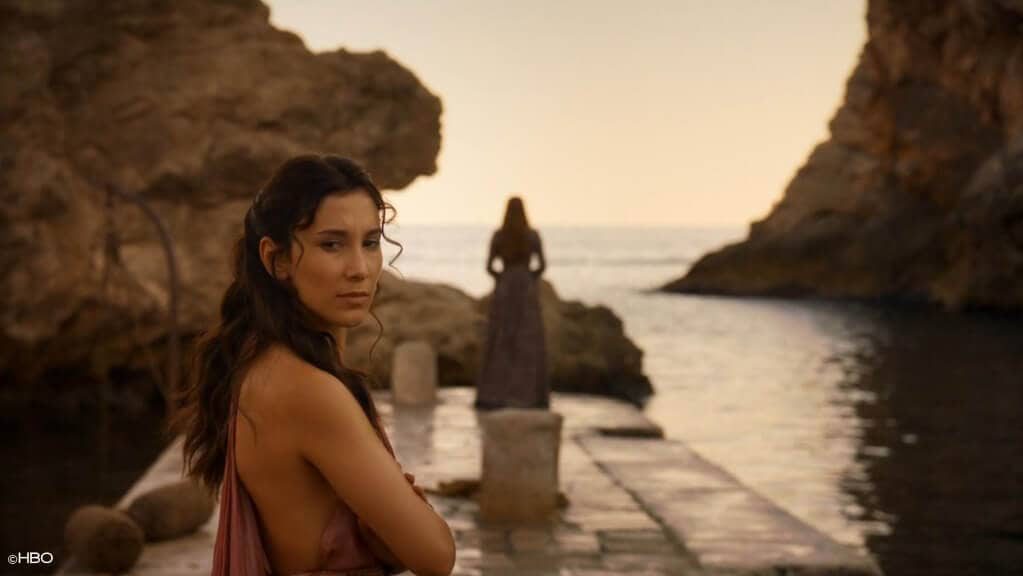 Pile Bay and the nearby beach are probably the most used locations in filming the Game of Thrones series.

Pile Bay is actually the Blackwater Bay, in fact this is where the famous battle took place. It is the scene place of all the boats departing from King’s Landing.

In case you want to linger there for a while and enjoy the monumental view of the bay, go to one of the two nearby cafes – Dubravka or The Kop. 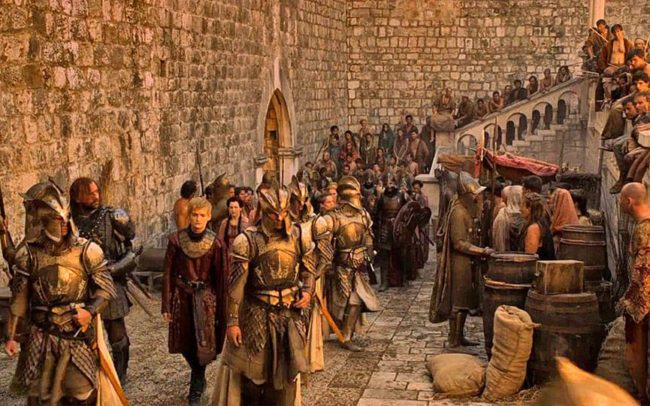 Pile Gate is one of the main entrances to the Old Town. In fact, you can easily recognise this filming location from the famous riot scene in Game of Thrones when the poor and hungry people turn on King Joeffrey.

Museum Rupe is an ethnographic museum. In Game of Thrones,  Oberyn confessed to Tyrion on this filming location that he came to seek vendetta for his dead sister and her children.

Jesuite Stairs is the place of the infamous Walk of Shame, one of the most popular filming locations & scenes in Game of Thrones. You will almost be able to hear the ringing of the “shame bell” when you get there. The only thing missing would be scandalously naked queen Cersei. 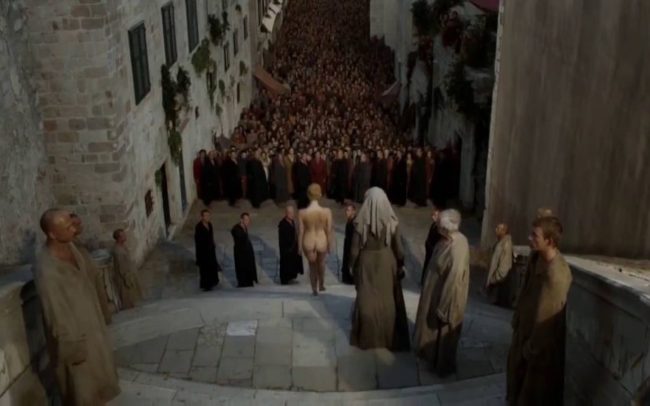 Rector’s Palace is a filming locations for a few Game of Thrones scenes. In particular, the interior of the Rector’s palace features in a scene where Daenerys comes to ask the Spice King for ships.

Coming into the Old Town from Ploče gate, there is a small bridge-like passage that served as the entrance to the Red Keep. Further on, there is an oval set of stairs in front of Dominican Monastery where the protests against the Lannisters started.

take a day trip to this magical island

This Game of Thrones filming location is a glimpse into the Kingdom of Qarth, but it is also a beautiful green island across Old town Dubrovnik
(15 min by boat).
The botanical gardens and the former Benedictine monastery were the main filming locations for Game of Thrones scenes when Daenerys attended a garden party hosted by Xaro Xhoan Daxos.

Top Game of Thrones Dubrovnik tip – get a picture on the Iron Throne!

The Iron Throne used for filming in Dubrovnik is in the Monastery on Lokrum island. Taking your picture on the Iron Throne is free. Get the coolest souvenir from the kingdom of Game of Thrones. Guaranteed to make your friends jealous.
Make your visit to Lokrum a day trip & pack some drinks & snacks. Explore the island which is also a natural reserve, pet some bunnies, take a swim & have a picnic.

Visit this abandoned hotel’s exterior and accompanying rocky beach in the afternoon.

The sunset from there is amazing and the view of the Old Town is even more breathtaking!

This filming location in Game of Thrones hosted the battle between Oberyn Martell and the Mountain. Unfortunately, we all know how that one ended. Bring some flowers in Oberyn’s honor when you visit!

If you ever imagined what it would be like to be Lady Olenna Tyrell, head out to her residence in Trsteno arboretum (20 min drive from Dubrovnik)!  Any Game of Thrones scene where she is walking, scheming and plotting surrounded by beautiful flowers and a nice view – was filmed in the Arboretum.

IMPORTANT INFO: You will need to buy a ticket at the entrance: 50kn adults, 30kn children and students.

Share the Game of Thrones love with your friends

Everything you GOT to know to plan your perfect holiday in King’s Landing:

Game of Thrones inspired activities in Dubrovnik you do not want to miss! (non fans will enjoy these too!)

SHOW ME WHAT YOU GOT!

NOT INTO GAME OF THRONES ACTIVITIES IN DUBROVNIK?

There are plenty of other things we can recommend you.

Things to do Dubrovnik

Find out tips for travelling,  things to do in & Dubrovnik and area (recommended by locals) to help you plan an unforgettable holiday

Things to do Dubrovnik with kids

Don’t miss these family friendly activities if in Dubrovnik with kids. Plan a holiday you and your kids will be excited about!